Echo Lake is located about an hour northwest of Montreal in the municipality of Morin-Heights, part of the MRC des Pays-d’en-Haut.

Not to be confused with the many Echo lakes in Quebec! Before being called Echo, our lake was named Cedar lake then Joe lake, in honor of the owner of the first residence built on the shoreline of the lake.

The lake now owes its name to the echo, this acoustic phenomenon that characterizes bodies of water surrounded by rocky cliffs and mountains. Furthermore, our lake differs from other Laurentian lakes which are generally elongated. For some, the outline of the lake is reminiscent of a large bird with wings and legs outstretched and for others, a four-leaf clover, due to its four almost identical bays.

Echo Lake covers an area of 0.287 square kilometers. It originates at Lake Anne, about fifteen kilometers upstream. Jackson Creek feeds the lake and discharges into Simon River which flows into the North River.

The deepest point of the lake is 11.3 meters. It is located in the middle of the bay dominated by the elephant rock, well known to swimmers. The four-leaf clover-shaped design of the lake, its varied vegetation, and a different geology from bay to bay, offer unique and spectacular views from each of the fifty or so lakefront houses.

Another feature of Echo Lake is the New England-style houses and the large number of log dwellings scattered around the lake. Once summer cottages, these homes have almost all been adapted for winter conditions, restored, and enlarged by owners mindful of keeping their original charm.

With their verandas on three sides, their sloping roofs and their white paint clapboard structure, the first houses cannot deny their origins. However, the log houses on Echo Lake have a very original style thanks to entrepreneur Georges Binns, active around the lake between 1935 and 1955 and especially on Log Village and Cottage roads.

The history of Echo Lake is intimately linked to the colonization of the Pays d’en-Haut and then to the development of recreational activities in the Laurentians in the 20th century. 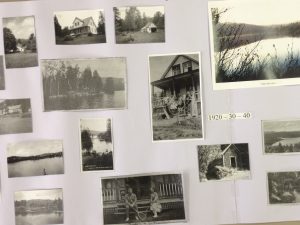 The very first dwelling of Morin-Heights was built at Echo Lake. In 1848 Thomas Seale and his brother, originally from Connaught, Ireland, received Crown land and built the first farm in Morin Township. Parts of this Echo Lake Road square logs house survive the test of time despite additions and renovations made by its various owners.

In the 19th century, pioneers of the area, such as the Seale, Watchorn, Newton and Jekyll, went to the lake mainly to fish, water their animals and cut ice in the winter. 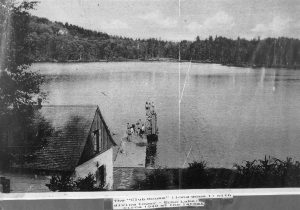 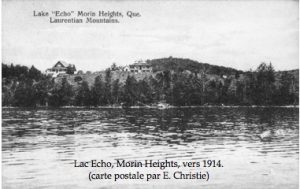 Around 1895, the Canadian National Railway inaugurated a passenger train service allowing Montreal-area vacationers to access Morin Flats (now Morin-Heights) and consequently Echo Lake, an area surrounded by farms at the time. At first, families came in the summertime to enjoy the clean air of the countryside. Some settled with servants and luggage in the village’s boarding houses while others were housed on farms.

The first country homes were built in 1904 by the Binns and Henderson families, modelled on the New England summer cottages style. These early houses, some built quite far from the shore, all had magnificent views of the lake. This was the time when fields and flocks of sheep dominated the landscape.

Here is a reproduction of a letter written on a beautiful day in the summer of 1914 by the owner of a second home on Lac Écho. This testimony, and the quietude that emanates from it, is disturbing when we see that it was written on the eve of the declaration of the First World War.

At this writing, July 23, 1914, I cannot refrain from recording the fact that surrounded by my wife and children, in the midst of books and friends, never has life seemed so agreeable. I fancy I hear the throb of the city over the hills. I would wish it to be my last place of rest, and if my wife should survive that Highland Cottage be her absolute property. To me its many pleasant associations will hallow itself for ever in my memory.

– Fred Abrahams, Owner and Publisher of The Montreal Herald

It was during this period, in 1912 or 1913, that the first Echo Lake regattas were organized. This tradition continues to this day.

For a few years, on New Year’s Day, horse-drawn sled races were held on the frozen lake. This was, of course, at a time when the residents still owned horses. Only one carriage was ever lost, but the horse was miraculously saved. This incident may have put an end to this activity.

It was around 1930 that Morin-Heights became a popular destination for winter sports, especially skiing. The train braved the worst winter conditions to bring winter sports enthusiasts to this snow paradise, usually for the day.

It was also during this period that cottages were renovated to withstand winter conditions and that George Binns started building log houses (the so-called “loggies”). Fortunately, this housing development did not hinder the beauty of the lakefront thanks to the diversity of Echo Lake landscapes, each lot having its own unique view of the lake. 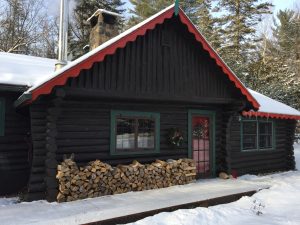 The Echo Lake “loggies” were built of spruce and fir wood from the area. Thin dark-coloured logs and Saddle Notch corners distinguish Echo Lake log houses from any other in Canada. It was the construction of the famous Château Montebello, built in just four months in 1930 by Victor Nymark of Finish origin that launched this style of construction in the Lower Laurentians.

The Echo Lake “loggies” were built of spruce and fir wood from the area. Thin dark-coloured logs and Saddle Notch corners distinguish Echo Lake log houses from any other in Canada. It was the construction of the famous Château Montebello, built in just four months in 1930 by Victor Nymark of Finish origin that launched this style of construction in the Lower Laurentians.

The German-born painter Helmut Gransow, a resident of the area in the ‘50’s added his personal artistic touch to shutters, walls and ceilings of several homes. He imported this style of painting from his native country where this decorative arts practice was used instead of the much more expensive wallpaper technique.

Towards the end of this period, farmland disappeared around Echo Lake in favour of pretty country homes built on smaller lots. The community expanded as the spirit of good-neighbourliness grew. As proof, the existence for some years of a Club-House, where residents gathered to go swimming and dance on Saturday nights !

With the improvement of roads and the lure of skiing, Echo Lake became a four-season destination and resort area. Farms were divided up and sold in smaller lots and the forest naturally regained its rights on land around the lake.

By 1960, all the land had been built. Fortunately, Echo Lake escaped the trend of extreme lakefront clearing, a popular practice in landscaping at the time. As a result, most of the land around the lake remains in its natural state.

At that time, some McGill University professors and doctors had country homes on the lake, attracted by the calm, the purity of the lake water, the wildness of its shores and the absence of motorboats. These owners, mostly English-speaking, were more inspired by the concept of English gardens, a style of landscaping that favoured creating a natural harmony of vegetation rather than its domestication.

In 1980, there were a record 88 houses around the lake, an impressive number considering its size. This new density created an enormous pressure on the environment since certain homes were often used year-round and others were now housing permanent residents.

The Echo Lake community did mobilize thanks to the leadership of a few visionary owners and the spirit of collaboration already present. A huge project of shoreline revitalization was undertaken at a time when the environment was not the hot topic that it is today.

The Association focussed its mission and priorities on the issue of the environment as regulations governing the protection of lakes and their shores were clarified and environmental concerns grew at various levels of government.

As part of its mission, the Association also created a voluntary code of ethics. This guide allows the Association to table the environmental values of the community to new owners, and remind the elders of the lifestyle code that prevails around Echo lake.

The federal status prohibiting motorboats on Morin Heights lakes is, without a doubt, the major element that allowed us to retain the serenity of this body of water, control the deterioration of the water quality and prevent the erosion of Echo lake shores. Our lake and its environment were thus preserved at a time when environmental concerns were rare.

The Association is playing an increasingly active role in addressing the many challenges linked to the preservation of the water quality and tranquillity of the lake. Since the late 1970s, every decade has brought new challenges and the future, climate changes oblige, might reveal new, ever more complex issues.

The effects of climate change will disrupt the entire planet and will not spare the Laurentians or its lakes, large and small. The Association will have to continue its environmental monitoring with increased vigilance.

The dangers of global warming are now present in areas where they were not expected. Geese are a good example. Their migration has always been a very moving sign of the arrival of autumn or spring. But now some of these wild birds have settled permanently around our lake and are a real source of pollution.

Echo Lake, however small and as protected as it is, is not immune to an invasive algae bloom. Recreational activities now pose a threat. Regattas, fishing and boating could, if not practiced carefully become a source of contamination. If our guest’s, tenant’s and fishermen’s boats are poorly cleaned or not cleaned at all, they can carry bacteria as a source of contamination.

The challenges of protecting our environment are many and the purpose of this site is to help homeowners cope. The following pages deal with: